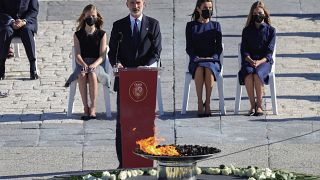 Spain paid tribute to its 28,400 coronavirus victims on July 16 when around 400 special guests gathered at the Plaza de la Armeria in the Royal Palace of Madrid.

King Felipe VI presided over the official tribute. "Spain has shown its best spirit. With the passing of time, we will remember that we were an example of civic responsibility, maturity, resistance and commitment to others," he said, adding that "it's been hard, very hard".

Members of the Spanish government, the EU parliament and representatives from health organisations were present. President of the European Commission Ursula von der Leyen tweeted that it was a"privilege and an honour to pay my respects to the Spanish victims of coronavirus and pay tribute the frontline workers".

It is the first time since 1977, the beginning of Spanish democracy, that such a ceremony has taken place in the official residence of the royal family.