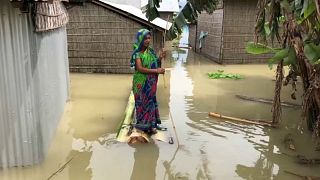 The swirling grey waters of the Brahmaputra, one of Asia's largest rivers, continued to wreak havoc in northeastern India's Assam state, displacing more than 2 million people, officials said on Tuesday.

Authorities in the state confirmed 77 deaths due to inundation and mudslides since the beginning of the floods late last month and said vast areas were still underwater with 26 of the state's 33 districts badly affected.

Thousands of people were seen taking shelter Tuesday on a raised river embankment after being displaced from their submerged homes in central Assam's Morigaon district,

The Brahmaputra River, which flows through Tibet, India and Bangladesh, burst its banks in Assam late last month, inundating large swathes of the state.

It also triggered mudslides that compounded the woes of the affected villagers.

The floods also inundated most of the Kaziranga National Park, home to the rare one-horned rhino, authorities said Tuesday.

In Pabitora wildlife sanctuary, 35 km east of state-capital Gauhati, an entire one-horned Rhino population of over a hundred were taking shelter on artificially built highlands.

Monsoon rains hit the region from June to September.

The rains are crucial for rain-fed crops planted during the season.