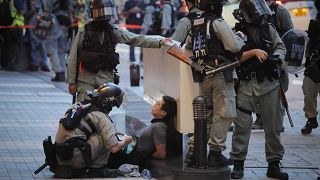 Around 370 protesters were arrested in Hong Kong, including 10 for breaching a new security law, according to police.

Pro-democracy demonstrators gathered at a shopping centre on Wednesday, on the 23rd anniversary of the city's handover from the UK to China.

The July 1st rally is held every year to march against Beijing's authority over the special administrative region but took on a new dimension amid the ongoing unrest.

The China-approved new law came into effect on Tuesday night and allows authorities to crack down on secessionist gatherings in the city. Critics say it ends freedoms that were guaranteed for half a century when British rule ended in 1997.