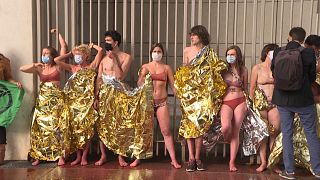 Dozens of  "Extinction Rebellion" activists staged a surprise protest on Tuesday in front of the entrance of the Ministry of Economy and Finance in Paris.

Chained semi-naked to the gates of the ministry building and covered in fake blood, activists from the group voiced their opposition to France's post-COVID-19 recovery plans "that give billions to ultra-polluting industries."

"This theatrical and visual action aims to represent the fragility of our system (economic, social, health) and of our marine and terrestrial ecosystems in the face of the choices of the State which puts the whole planet and its inhabitants in danger," Extinction Rebellion France wrote in a statement on its social media channels.

"Etsuki," an Extinction Rebellion activist, said: "I think confinement has made it clear that we can do very radical things very quickly, and that's what we need. Also, confinement made us realize that maybe a lot of things we didn't have access to, we didn't really need.

"And in fact, those two things together make us ready, we can, it's perfectly feasible to save the planet, and now is the time to do it."