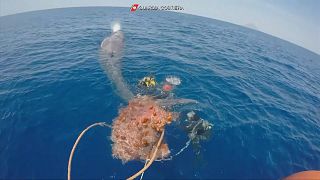 The coastguard was presented with a harrowing sight off Italy's Aeolian Islands when it arrived to free a 10-metre-long sperm whale tangled in fishing nets.

The male sperm whale - which is the largest toothed whale species - became trapped in a large net, which prevented its tail fin from moving.

Four biologists of the Filicudi Island sea turtle rescue and rehabilitation centre spotted the whale six miles from Salina Island - the second largest island in the archipelago north of Sicily - and alerted the coastguard.

The Italian coastguard first tried to free the whale from onboard its rescue boat, but the fin was so tangled that several divers were needed to cut the netting in the water.

Once it was freed, the sperm whale swam off to join three other whales who were apparently waiting for him.

According to the Italian coastguard, the type of fishing net was illegal.