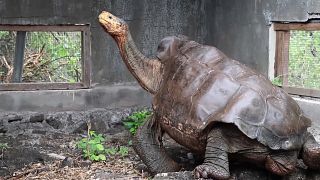 Having helped save his species from near extinction, centenarian Diego finally gained his freedom on Monday after siring more than 800 offspring during his years in captivity.

The Galapagos National Park freed 15 giant tortoises, ending its captivity breeding programme which saved the species from extinction by breeding more than 2,000 tortoises since the 1960s.

Park authorities dubbed the breeding effort as one of the most successful in the world, bringing balance back to the tortoises' native island.

Tortoises were quarantined and marked before their release on Espanola Island, which now hosts the Cheloinidis hoodensis species of the tortoise.

The Galapagos, whose variety of endemic species led Charles Darwin to conceive his theories on evolution, held 15 closely related species of giant tortoise according to the Galapagos Conservancy, which estimates that 20,000–25,000 wild tortoises live on the islands today.

At least four of the species are now considered extinct.