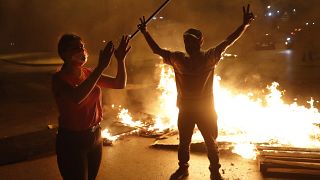 Beirut woke up to damaged shops and public buildings on June 12 after clashes erupted during the night between protesters and security forces.

During the clashes, protesters pelted police and soldiers with rocks, drawing volleys of tear gas.

Some protesters threw stones at offices of private banks in an expression of anger at their perceived role in deepening the economic malaise.

The clashes came during protests against the severe depreciation of the Lebanese pound.

The army was deployed to clear protesters who had blocked the main highway north of the capital Beirut, as Lebanon's prime minister held an emergency cabinet meeting to discuss the crisis.

Despite efforts to control the currency depreciation in recent weeks, the Lebanese pound tumbled to more than 6,000 to the dollar on Thursday, down from 4,000 on the black market in recent days.

The pound had maintained a fixed rate of 1,500 to the US dollar for nearly 30 years.

The crash appeared to reflect the growing shortage of foreign currency on the market amid the crisis - but also signalled panic over new US sanctions that will affect neighbouring Syria in the coming days as well as lack of trust in the government's management of the crisis.

Years of corruption and mismanagement have left the tiny Mediterranean country with depleted resources, while shrinking investment in the war-riddled region and falling remittances from Lebanese abroad only increased the shortage of foreign capital.

Nationwide protests broke out in October, forcing the incumbent government to resign.

The new government, sworn in at the start of 2020, had put together a reform programme, decided to default on Lebanon's sovereign debts and began talks with the IMF.