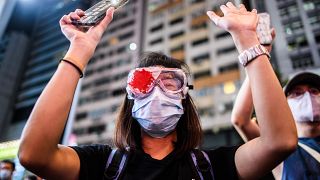 Thousands of Hong Kongers sang a popular protest anthem and chanted slogans across the city as they marked the first anniversary of major clashes between police and pro-democracy demonstrators.

The first major clash of the 2019 anti-government protests took place on June 12, when police used tear gas against the people occupying the Legislative Council.

The protests on June 12, 2020, started out peacefully with people holding pictures and lights in the air and chanting songs and slogans.

The scene turned into chaos when police started to disperse the crowds. According to footage emerging on social media, a knifeman attacked the protesting crowds and injured at least one person in Kwun Tong.

Police had warned people they risked arrest for unauthorised assembly if they took to the streets.

Officers reportedly pinned down several protesters outside two different department stores and footage shows people being arrested amid the protests. Among the people arrested was opposition lawmaker Ted Hui Chi-Fung.