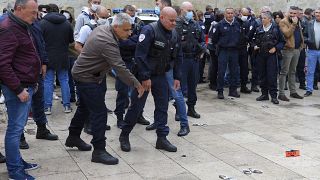 "It's a cry from the heart, a cry of anger": dozens of police officers break their own rules by demonstrating in uniform at "Human Rights Square" in Bordeaux to express their frustration at the measures announced by France's Interior Minister Christophe Castaner.

Castaner infuriated officers this week with a pledge of "zero tolerance" for police racism after some 20,000 people amassed at the Paris courthouse on June 2 in an echo of the Black Lives Matter protests in America.

About thirty police officers honked horns and jammed traffic in Paris. Setting off blue flares, they paraded through the Champs Elysées next to the Arc de Triomphe and held a minute's silence for fallen police officers outside the Interior Ministry where they sang the national anthem.

He said that while there were some bad elements within the police, overall the police as an institution was not racist.

Where police had to use force, it was "legitimate and not disproportionate," he insisted.