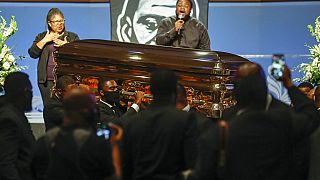 Hundreds of mourners said goodbye to George Floyd at his funeral on Tuesday after the the 46-year-old's death ignited protests throughout the world.

Floyd died on May 25 after a police officer pinned him down with his knee for nearly nine minutes despite Floyd's cries of distress.

The funeral was held in Floyd's hometown of Houston, Texas. It was attended by politicians, civil rights activists and celebrities.

"We are fighting wickedness in high places," said civil rights leader Al Sharpton in his eulogy.

"Even in a pandemic, people are walking out in the streets not even following social distancing because you've touched the world," Sharpton added.

The ceremony acknowledged other victims of police violence but also paid tribute to the man whose death has fuelled a movement.

"And as we lay you to rest today, the movement won't rest until we get justice," Sharpton said.