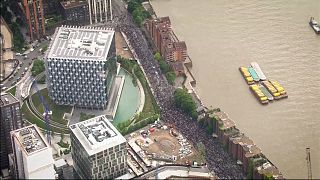 Hundreds of protesters surrounded the entrance to the US Embassy in London on Sunday, as anti-racism demonstrations continued in solidarity with American protesters after the murder of George Floyd in Minnesota last month.

The action comes after thousands of people protested in the streets near the UK Parliament and the prime minister's Downing Street residence on Saturday. There were clashes with the police, condemned by leading politicians, although the protests were largely peaceful.

Several UK cities have been witnessing protests after the latest death of an African-American at the hands of police in the United States, despite British officials warning against public gatherings because of the risk of spreading coronavirus infections amid the pandemic.