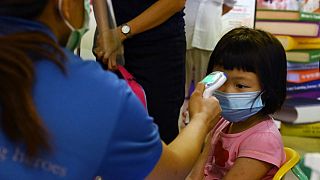 Schools reopen today, but daily classes on school premises will be held only for the graduating cohorts of Primary 6 and Secondary 4 and 5, who will wear masks while attending lessons.

All other students will alternate weekly between home-based learning and lessons in school.

Singapore initially kept infections low through a strict regime of testing and contact-tracing, only for major outbreaks to emerge from crowded dormitories housing low-paid foreign workers.

Authorities imposed a partial lockdown in early April, with schools and most workplaces told to close, and people only allowed to leave home for essential purposes.

But with new infections slowing and no major outbreaks outside dorms, the government began easing measures Tuesday, with certain age groups allowed back to school and some workplaces re-opening.

Pupils had their temperatures checked as they arrived at one pre-school following the lengthy break.