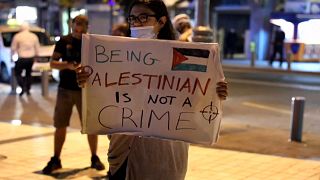 The shooting occurred on Saturday in the alleyways of the Old Walled City near the Lions Gate, an access point used mainly by Palestinians.

The Fatah party of Palestinian President Mahmoud Abbas denounced the killing as a "war crime". It said it held Israeli Prime Minister Benjamin Netanyahu fully responsible for the "execution of a young disabled man".

“We are really sorry about the incident in which Iyad Halak was shot to death and we share in the family's grief,” Gantz said. “I am sure this subject will be investigated swiftly and conclusions will be reached.”

Netanyahu, present at the Cabinet meeting as Gantz spoke, made no comment.

Palestinian leaders demanded that whoever killed the man be brought before the International Criminal Court.

Later, on Saturday, some 200 Israeli protesters protested near the police headquarters in Jerusalem to denounce Halak's killing.