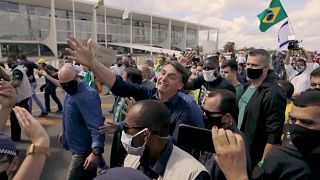 These are supporters of Jair Bolsonaro turning out to cheer him as he arrived in Brazil's capital Brasilia.

It comes three days after the country's supreme court released a video of a cabinet meeting in which Bolsonaro is alleged to have tried to interfere with the federal police.

The video purports to show Brazil's president expressing frustration at his inability to get information from police and vowing to change cabinet ministers if needed.

It was released as part of an investigation into claims Bolsonaro was trying to illegally interfere in a criminal investigation of his sons, a claim made by former justice minister Sérgio Moro when he resigned last month.

Bolsonaro's supporters say the video had strengthened Bolsonaro's position as it showed he was "the same" during closed-door meetings as he is when he "speaks with the people".

Those turning out in Brasilia also demanded that mayors and regional governors lift restrictions aimed at stopping the spread of COVID-19.

Bolsonaro has been cheerleading putting the economy first, saying more people would die if lockdown continues.

He has also been against wearing face masks and in the footage above hugs a girl without protective equipment.