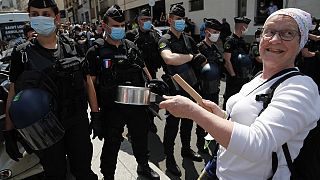 Protesters gathered outside a Paris hospital for the second time in as many weeks to demand better working conditions and pay.

France's healthcare workers claim they have not been given enough support during the COVID-19 pandemic, which has killed more than 28,000 people in the country.

President Emmanuel Macron’s government announced a pay bonus of up to €1,500 for all medical professionals earlier this month to recognise them for their work.

A pay bonus for non-medical hospital staff, such as cleaners, has also been promised by the government but no date has been announced for it.