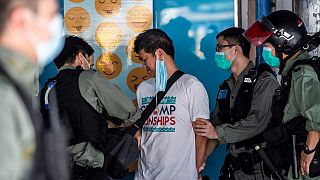 Mass arrests and the coronavirus pandemic ushered in a period of enforced calm.

But with the finance hub successfully tackling its outbreak small protests have bubbled up once more in the last fortnight.

Small flashmob demonstrations broke out in at least eight malls throughout Sunday afternoon prompting riot police to rush in and disperse heckling crowds of activists and shoppers.

At least three arrests were made while groups of officers conducted multiple stop and searches.

At the start of last year's protests, Lam likened herself to an exasperated mother -- and protesting Hong Kongers to demanding children -- in comments that only poured oil on the fire of public anger at the time.

Authorities banned an application for a Mother's Day march so small groups of masked protesters instead played cat and mouse with police in different shopping centres, a tactic used frequently last year.