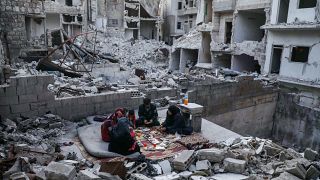 Tareq Abu Ziad and his family break the daily fast for the Muslim holy month of Ramadan while sitting in the rubble of their destroyed home in the town of Ariha in the southern countryside of Syria's Idlib. They fled the area late last year during a deadly Russia-backed regime offensive against the jihadist-dominated region but returned for the day to sit amid the memories of their former home.

Tareq Abu Ziad fled in December with his mother Samah Umm Tareq, his sister Zeinab, his wife and children. The offensive displaced some one million people -- the largest such wave of displacement in Syria's nine-year-old war. But last month Abu Ziad and his family returned to war-wracked Ariha, where they found a new home to rent and Abu Ziad found work in one of the town's few remaining bakeries.