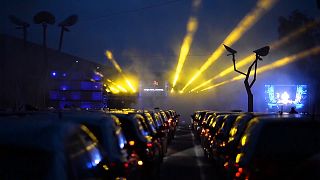 Despite strict social-distancing guidelines currently in place in Germany, people in the town of Schüttorf managed to party the night away on Friday as they attended a disco from the safety of their cars.

Hundreds of vehicles were treated to three hours of live music at a specially organised car disco.

Due to measures currently in place to combat the spread of the coronavirus, only two people were allowed to sit in each car whilst not being allowed to get out.

However, that didn't dampen the spirits of the party-goers.

Many sounded their car horns along with the music and some vehicles were even seen shaking as people danced throughout the night.

The event was hosted by the owner of one of Germany's biggest discos, Holger Bosch, who said that the pandemic at first stopped their business, leaving them "gobsmacked".

He said he was positively surprised by how disciplined people were during the event, adding there was a palpable sense of "togetherness" despite the physical separation.

According to Johns Hopkins University, Germany has had more than 164,000 confirmed COVID-19 cases and over 6,700 deaths.

For some, especially older adults and people with existing health problems, it can cause more severe illness, including pneumonia and death.