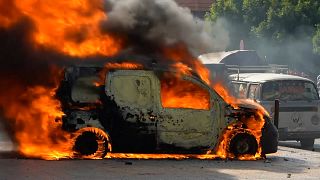 Protesters faced off against the army in the Lebanese city of Tripoli on Tuesday during the funeral of a young man killed in riots a day earlier.

The clashes - which began on Monday - follow a devastating crash in Lebanon's national currency, causing food prices to rise in Tripoli, Lebanon's second-largest city, and elsewhere in the country.

Fawaz al-Samman's body had been brought from his parents' home and displayed briefly outside his motorcycle repair shop before it was taken to a nearby cemetery.

As mourners gathered, others hurled Molotov cocktails and set fire to at least two banks. At least 12 people were detained, the Lebanese military said.

Over the weekend, the Lebanese pound hit a record low, with 4,000 pounds to the dollar on the black market while the official price remained at 1,507 pounds.