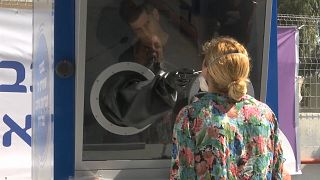 An Israeli health organization has set up a COVID-19 testing booth allowing quick tests with complete separation between medical staff and patients.

A person testing patients stands behind protective glass, with their hands in thick rubber gloves protruding from the booth, which was being used in Tel Aviv on Sunday (April 19).

People who come to be tested approach the station and the attendant takes a swab.

After the sample is taken, the gloves are sterilised for the next patient.

The test results are processed and are later reported through the patient's electronic health record.

Maccabi Healthcare Services director of communications Ido Hadari said the booth enabled tests to be conducted at a faster rate, while providing safety to both the tester and the patient.

Israel's Ministry of Health has confirmed 13,362 infections and 171 deaths as of Sunday.

But the virus is highly contagious and can be spread by those with mild or no visible symptoms.