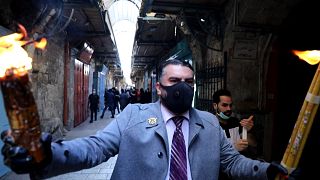 The coronavirus pandemic prevented thousands of Christian Orthodox worshippers from participating in one of their most ancient rituals on Saturday at the Jerusalem church that houses the tomb of Jesus.

Just a small group of top Eastern Orthodox clerics were able to mark the Holy Fire ceremony at the Church of the Holy Sepulchre, in a small room where tradition says that Jesus was crucified, buried and resurrected.

They emerged with their candles lit by a fire, considered to be a message from Jesus to the faithful.

The source of the fire is a closely guarded secret.

Representatives of the Orthodox denominations circled the room, chanting prayers that resonated in the empty church.

In normal times, the church would be packed with thousands of pilgrims and worshippers passing the holy fire to light their candles.

Queues to the church would snake around the narrow alleyways of Jerusalem's Old City.

As the coronavirus lockdown continues, Israel has said it is making arrangements to help church leaders transfer the flame to predominantly Orthodox countries including Greece, Russia and Romania.

On Saturday, the fire was used to light up candles which were then secured inside diplomatic vehicles before leaving the Old City of Jerusalem.