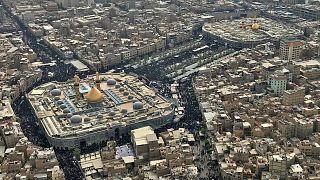 Iraqi authorities disinfected the holy shrines in the city of Karbala where religious tourism has nearly ground to a halt because of the new coronavirus.

The shrines of Imam Hussein and his half-brother Imam Abbas were disinfected.

Imam Hussein was killed in a climactic battle in Karbala in AD 680, which cemented the rift between Sunnis and Shiites.

But because of the new coronavirus, the city is nearly empty of tourists.

Nearby hotels for pilgrims were almost deserted after authorities closed the borders to Iranian nationals.