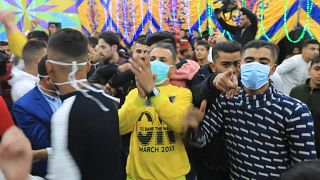 Palestinians in Gaza celebrate a dancing wedding despite coronavirus

A day before authorities imposed a ban on festive events, this group of men were celebrating a wedding in Rafah in the southern Gaza Strip.

Authorities in Gaza, which has been under an Israeli and Egyptian blockade since the Islamic militant group Hamas seized power from rival Palestinian forces in 2007, confirmed its first two cases overnight, in returnees who had come from Pakistan.

An outbreak could wreak havoc on the Palestinian territory, which is home to over 2 million people, many living in cramped cities and refugee camps.

Gaza's isolation likely delayed the arrival of the coronavirus, which has infected more than 300,000 people worldwide and killed more than 13,000. More than 90,000 people have recovered.