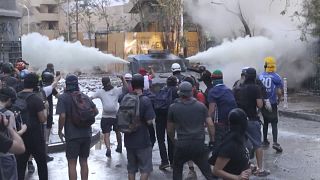 Chile: Clashes as thousands protest in Santiago against the government

Clashes take place between demonstrators and police as thousands gather in Santiago's Plaza Italia to protest against President Sebastian Piñera and his government.

Tens of thousands of protesters gathered in Santiago on Friday for the largest rally of the year in Chile, where this week's street protests against President Sebastián Piñera regained strength to demand social improvements.

The protesters began to gather in the afternoon near Plaza Italia, in the centre of the capital, which has been the epicentre of massive demonstrations since the social protests broke out on Oct. 18, and have taken over all sides and surrounding streets.

Neither the police nor the government of Santiago provided any reports on the number of people attending, but the demonstration was by far the most massive so far this year. It followed a call from social organisations to reactivate the protests with force in March, which sees a large part of the country's productive activities resume their pace after the southern summer holidays.