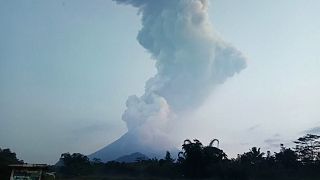 The international airport in Solo city, some 40km away from the volcano, was temporarily closed on Tuesday morning after authorities issued a code-red aviation alert due to ash emission into the atmosphere.

Ashfall was reported around a 10km radius from the peak. No casualties have been reported, as emergency officials urged residents to remain calm and 3km away from the peak of the volcano.