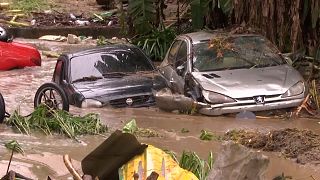 At least four people have died and hundreds affected by heavy rains that have been lashing Rio de Janeiro since Saturday, causing severe floods.

In Realengo, a neighborhood in the west side of the city, at least six cars were dragged away and remain stranded in floodwaters.

Residents saw their houses filled with water and mud that reached more than a metre (three feet) in height.

Overflowing rivers, flooded streets and mud left by the flooding were seen in different parts of the city and the state of Rio on Monday morning.

The north and west of the city, were the most affected by the storm.

Machines were removing the resulting debris and some donations were sent to those who lost furniture, food and most of their belongings because of the floods.

City and state authorities are in a state of alert as more rains are expected, not just in Rio but in also the southeast of the country in the coming hours.