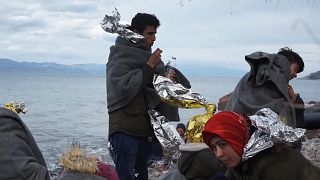 A dinghy full of migrants, thought to have come from Turkey, arrived on the Greek island of Lesbos on Friday.

It comes after Turkey, which hosts 3.6 million Syrian refugees, announced it could no longer stop them making for the EU.

That move was a response to the killing of at least 33 Turkish soldiers by Syrian government forces in the province of Idlib.

Experts have told Euronews Turkey wants the EU to pressure Russia into ending its support for Damascus in Syria and agree to a ceasefire.

The latest move by Ankara appears to go against a 2016 deal with Brussels in which it agreed to step up efforts to halt the flow of refugees into the EU.

Turkey's DHA news agency reported that some 300 Syrians, Iranians, Iraqis, Moroccans and Pakistanis were gathering at the border with Greece, while others massed on beaches facing Greek islands off Turkey's western coast.