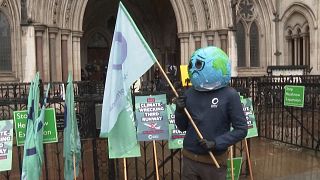 Britain's Court of Appeal on Thursday ruled in favour of green campaigners who oppose the building of a third runway at London's Heathrow airport, Europe's busiest.

The court said the UK government -- which in 2018 approved the Heathrow extension -- had failed to take into account its commitments to the Paris Agreement to limit climate warming.

The legal action against the approval was brought by various London councils, environmental groups including Greenpeace and Friends of the Earth, and London Mayor Sadiq Khan. They lost at an original hearing in May.

In a summary, judge Keith Lindblom said the Conservative government under then-prime minister Theresa May gave no explanation of how it took into account the 2015 Paris accord -- which seeks to cap climate warming to less than two degrees Celsius.

"We won! Today we blocked the Tory government plans to build a third runway at Heathrow Airport," the London mayor said.

"Today's judgement is a major victory for all Londoners who are passionate about tackling the climate emergency and cleaning up our air."