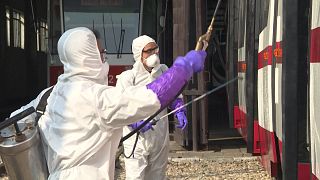 The authoritarian state is pulling out all the stops to try to protect itself from the virus that first emerged in neighbouring China, long its key diplomatic ally and trade partner.

After the virus emerged, Pyongyang quickly closed its borders, cutting itself off from the outside world in a move diplomats and analysts say is its best method of self-protection given the weakness of its health infrastructure.

Arrivals are subject to 30 days' isolation and it has stepped up its efforts internally, with the official KCNA describing an intensifying "anti-virus campaign", including door-to-door health check-ups and loudspeaker vans instructing citizens on hygiene practices around the country.

Foreigners are facing especially tough restrictions: all of those resident in the country have been subjected to quarantine at their premises since the beginning of February.