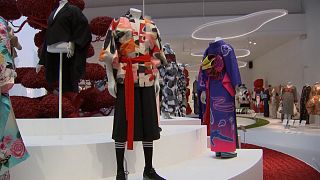 A new exhibition at the Victoria and Albert Museum in London called 'Kimono: Kyoto to Catwalk' features more than 300 items that reflect the cultural impact of the iconic Japanese garment.

Wearing the kimono fell into decline in the twentieth century. After World War II, the shortage of fabrics meant that it became an item to be used occasionally on special occasions.

But since the turn of the century, the kimono has undergone a kind of rebirth, thanks to the influencers of social networks and new designers.

The exhibition shows its evolution from everyday dress, to use for special occasions and catwalk creations, explains curator Josephine Rout.