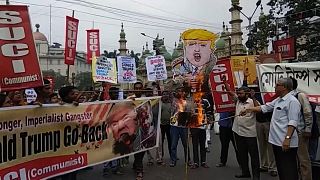 Protesters gathered in several cities in India to express anger at Donald Trump's visit. In the city of Kolkata they burned the image of the United States president, while shouting slogans against imperialism.

Trump is in the country to discuss trade agreements and seek an economic balance in the region that acts as a counterweight to China's economic power.

In New Delhi there were also protests on Monday against a new citizenship law that provides accelerated naturalization for some religious minorities born abroad, but not for Muslims.

A police officer died in the violence, a police spokesman said.

Protests against citizenship law have erupted throughout India since it was approved by Parliament in December.