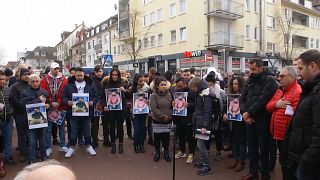 About 300 people gathered for a vigil and a solidarity march in the German town of Hanau, two days after a racially motivated shooting in the town left nine dead.

In front of the city hall, about 200 participants gathered on the market place and formed a human chain.

On February 19, a 43-year-old German man fatally shot the nine people with immigrant backgrounds before killing his mother and himself.