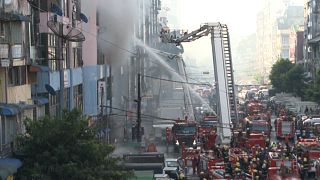 Scores of people were rescued from a major building fire in Myanmar's commercial hub Yangon, with many brought to safety from the highest floor by cherry-picker crane.

Around 60 fire trucks raced to the 12-storey apartment block as smoke and flames spread through the building.

No deaths had been reported by mid-morning and the cause of the blaze had not been established.

Nyi Nyi, 34, told AFP he ran out of his home to warn his elderly neighbours but was forced to retreat after nearly passing out.

"I couldn't see anything as it was too dark with smoke," he said, adding firefighters arrived just in time.

After years of under-investment, Yangon's downtown buildings have notoriously poor safety standards and fires are common.