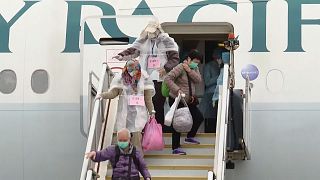 They will be put into 14 days quarantine at a suburban government housing block, recently built but as yet unoccupied.

Nearby residents in the district of Fo Tan have protested against the government's decision to use the block for the temporary accommodation of people in quarantine.

More than 74,000 people have been infected in China and hundreds more in some 25 countries, with Iran reporting two deaths, the first fatalities in the Middle East.

A World Health Organization official noted the progress in China but warned it had not reached a turning point just yet.

Chinese officials said this week that their drastic containment efforts, including quarantining tens of millions of people in Hubei and restricting movements in other cities nationwide, have started to pay off.

Chinese authorities placed Wuhan, a city of 11 million people, under quarantine on January 23 and quickly locked down the rest of Hubei in the days that followed.