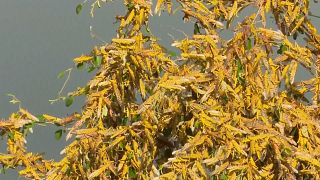 Wearing breathing apparatus, they walk in single file, armed not with guns, but tanks full of chemicals.

They are fighting the latest swarm of desert locusts that have landed here at Komoret Village in the north-eastern district of Amudat, Uganda.

Considered to be the most destructive migratory pest in the world, a small swarm of one square kilometre of desert locusts can eat the same amount of food in one day as 35,000 people.

This latest swarm - the third to hit Uganda in as many days since 9 February - measures just over a square kilometre.

More than 2,000 army and civilian personnel are combing bushes and trees to hunt down the pests that migrated from neighbouring Kenya.

There, farmers have been experiencing the worst infestation the country has seen in 70 years. The infestation has now spread to seven East African countries including Eritrea, Somalia and Ethiopia.

Armed with spray pumps loaded with pesticide, the soldiers spray as much of the area as possible - often climbing high into trees to reach the locusts.

More than 3 million locusts have been killed through spraying, according to the government, but the swarms continue.