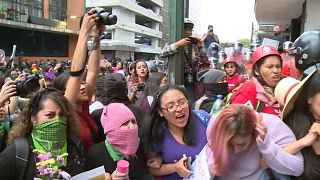 Angry demonstrations broke out in Mexico City on Friday as hundreds of women protested the gruesome slaying and mutilation of a young woman, a case that has come to personify outrage over the rising incidence of gender-related killings, or femicides.

In the morning, dozens of protesters spray-painted slogans such as ``"We won't be silenced'' on the facade and doorway of the capital's National Palace as President Andres Manuel Lopez Obrador was holding his daily news conference inside.

Hours later hundreds marched to the offices of a media outlet that published grisly images of the crime scene, and a newspaper truck outside was partially set ablaze. Some spray-painted the plastic shields of riot officers as the crowd chanted ``Not one more murdered!'' and ``Justice!'' Police unleashed pepper spray.

The killing last weekend of Ingrid Escamilla, a young Mexico City resident who was allegedly murdered by a boyfriend, has horrified Mexicans.

The man, who has been arrested and purportedly confessed to killing Escamilla with a knife, mutilated her body and flushed part of her corpse into the sewer.

About 10 women are slain each day across Mexico just because they are women, the government and activists say. Last year there were 3,825 in all, which was up 7% from 2018, according to federal figures.