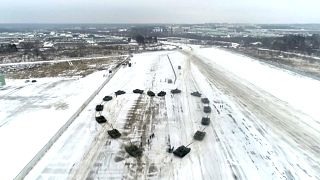 The high-octane romantic stunt was filmed in a video published by the defence ministry on Friday, Valentine's Day.

As snow fell, the T-72B3 tanks rolled into position on the Alabino training ground outside Moscow.

Lieutenant Denis Kazantsev led his long-term partner Alexandra Kopytova into the centre as she held her hands over her eyes, the defence ministry's TV channel Zvezda reported.

Kazantsev, a platoon commander, went down on bended knee, holding a bunch of red roses.

The tanks used for the romantic manoeuvre also take part in the annual Victory Parade on Red Square, Zvezda reported.