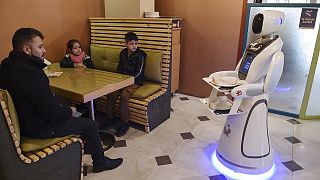 "Thank you very much," the machine says in Dari, one of Afghanistan's two main languages.

Named "Timea" and measuring about 150cm (5ft) in height, the robot performs only rudimentary tasks.

She delivers plates to tables, which diners then take from a tray, and can say basic phrases including "Happy Birthday."

She also can stop when it encounters an obstacle, and customers can place orders via a touch panel.

After decades of war that has left much of the country's infrastructure in ruins, the sight of a battery-powered waitress has provided some light relief in Kabul.

But the story is not without controversy. Some Afghans see Timea as a threat to the country's dire unemployment situation.

ROBOT KABUL CUSTOMS AND PRACTICES
Now playing Next
no comment