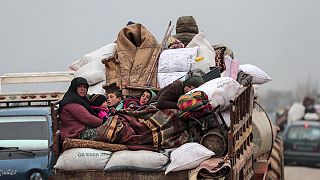 Government forces battling rebels in northwestern Syria took full control of a key highway on Tuesday, over which they lost control in 2012, linking the country's four largest cities.

The latest gain marked another step in the government's advance against Syria's last rebel-held pocket, where intense fighting has displaced 700,000 civilians since December.

The remaining rebel fighters and some three million civilians are being pushed ever closer to the Turkish border by the regime's inexorable northward push.

On Tuesday, government and allied forces retook the Rashideen al-Rabea area near Aleppo, the Syrian Observatory for Human Rights said.

A wave of displacement that has seen around 700,000 people flee a regime offensive in Syria's Idlib region is the biggest of the nine-year-old conflict, the United Nations said Tuesday.

"In just 10 weeks, since 1 December, some 690,000 people have been displaced from their homes in Idlib and surrounding areas," a spokesman for the Office for the Coordination of Humanitarian Affairs said.

The conflict in Syria has killed more than 380,000 people since it erupted following the brutal repression of popular demonstrations demanding regime change.

More than half of Syria's population had already been displaced by the nine years of conflict, but the latest regime offensive against the last rebel enclave in the country has sent these numbers soaring.

Turkey, which already hosts more than three million refugees, fears a massive fresh influx from Syria and has kept its border closed to the newly displaced people in Idlib.

The exodus, which has seen endless convoys of families with their mattresses stacked on trucks criss-cross the war-torn province, coincides with a bitter winter.