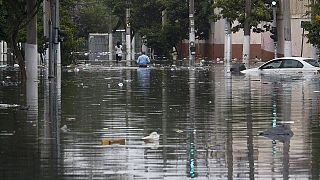 Gabriel França, a 27-year-old engineer living in the community in the outskirts of São Paulo, said he heard his neighbours screaming. He walked outside and filmed the mudslide as it was taking place. Screams could be heard on the video he shot with a cell phone.

Firefighters later rescued a girl trapped in one of the homes

She was in one of the two houses covered by the slide set off by torrential rains. A third house was partly damaged.

The heavy downpour that struck São Paulo from late afternoon on Sunday, February 9th, has caused destruction and chaos during the day. The storm caused rivers to overflow, dozens of floods, landslides and brought the city to a halt.

The water level only began to lower in the early hours of Tuesday, February 11th.