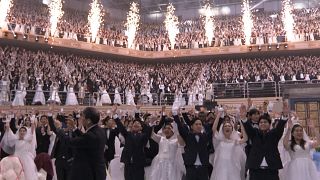 South Korea's Unification Church held a mass wedding on Friday amid the outbreak of a virus from China in the country.

Around 6,000 couples took part in the ceremony at the Cheongshim World Peace Centre, in Gapyeong, about 40 miles (60 kilometres) northeast of the capital, Seoul.

The couples, who said they met through church activities and parents' introduction, exchanged vows in front of more than 18,000 guests from all over the world.

The couples said they are unfazed by the novel coronavirus that has killed more than 600 people, mostly on mainland China, as of Friday.

So far 24 people have been infected in South Korea.

Despite pandemic fears, most people were mask-free during the ceremony.

The organiser said the venue was thoroughly sterilised and thermal surveillance camera has been put in place.

No couple had cancelled the trip due to coronavirus, the organiser told The Associated Press.

Unification Church, founded in 1954, regularly holds mass wedding ceremonies for its followers around the world.

The ceremony was led by Hak-ja Han, the widow of church's founder Reverend Sun Myung Moon who passed away in 2012.

This year marks the 100th birthday of Moon.

Moon, a self-proclaimed Messiah, pioneered the Unification Church in Seoul in 1954 after claiming to hear Jesus Christ's calling when he was 15.

His church, which claims to have millions of followers worldwide, became famous for its mass wedding ceremonies.

In the past, the church had faced numerous controversies, often being accused of brainwashing members and fleecing them of cash, breaking up families, and rumours of Moon's sexual relations with disciples.