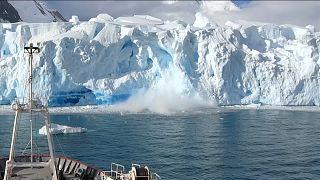 The moment a tower block of ice broke off from a glacier in Antarctica was captured on camera last week.

The huge slab toppled from the William Glacier and rolled into the waters of Börgen Bay, Anvers Island, on Thursday, January 30 2020.

Scientists on the British Antarctic Survey ship, the James Clark Ross - from which the collapse of the glacier was filmed - estimate that the block weighs thousands of tonnes and is at least 40 metres high.

The resulting iceberg was later grounded on the seabed near the glacier, with offcuts of ice covering a massive area around it.