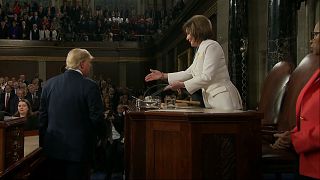 At the start of the State of the Union address, House Speaker Nancy Pelosi extended her hand to Donald Trump.

But instead of shaking it, Trump turned away to face the audience of lawmakers gathered for the annual address.

Pelosi shot him a look.

Then as Trump wrapped up his 78-minute address, Pelosi appeared to rip up a copy of his speech as she stood behind him.

Trump delivered the address against a sharply partisan backdrop, on the eve of his likely impeachment acquittal and in the aftermath of the chaotic first votes of the race to replace him.

The first president to run for reelection after being impeached, Trump received a raucously divided welcome to the House of Representatives, with some Republicans chanting "Four More Years" while Democrats stood silent.

The Senate is poised to acquit him Wednesday of the two articles of impeachment.

The president made no mention of impeachment during his speech, focusing instead on highlighting the strength of the economy.

Asked afterwards in the halls of the Capitol why she ripped up the speech, Pelosi responded that it was the "the courteous thing to do considering the alternative."