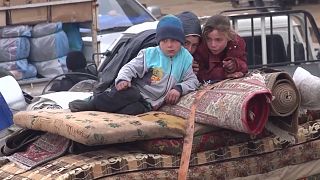 A Russian-backed Syrian government offensive against the country's last rebel enclave in Idlib has caused one of the biggest waves of displacement in the nine-year war.

Displaced families have headed north of Idlib towards safer parts, seeking refuge in informal tented settlements near the border with Turkey.

Since December 2019, an escalation in violence has forced nearly 300,000 people to flee their homes in the area. Eighty per cent are estimated to be women and children.

As temperatures continue to drop, the newly-displaced families are facing a harsh winter, living in extremely basic conditions and struggling to keep their children warm.

As violence in northwest Syria and displacement continue, children and families’ needs are growing more acute by the day.

The World Health Organisation expressed concern on Monday (February 3) that the conditions in the violence-plagued region were conducive to the outbreak of diseases.