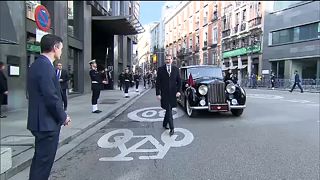 Spain's two parliamentary houses met together for the formal state opening by King Felipe VI, held at the Lower House Congress of Deputies in Madrid.

"I congratulate [Prime Minister] Pedro Sanchez Perez Castejon and I wish him much success in the great responsibility he has taken," Felipe said.

"Spain cannot be for some against others; it must be of everyone and for everyone."

Deputies and senators, including many of from the United Podemos (far-left party), applauded the king for several minutes.

Outside the congress, 49 representatives of various parties from Catalonia and the Basque Country read a joint statement in which they rejected the legitimacy of the king and boycotted the ceremony.