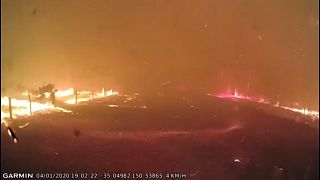 A harrowing video released by firefighters in New South Wales shows how dangerously fast a bushfire can spread.

Firefighters with the Dunmore Rural Fire Brigade were dispatched to protect properties threatened by the Currowan Fire in Shoalhaven when a sudden southerly wind pushed the fire through vegetation and across the road.

The video, released on January 29, shows the operation that took place on January 4. The wind hit the area 10 minutes earlier than forecasted, officials said. Crews who were on the road ran back to their trucks and drove to safety as winds hit 100km/h. The day immediately turned into night, as the ember shot across the road.

“This goes to show what happens in just over 3 minutes,” the Dunmore fire brigade said.

The crew was safe and managed to save a property threatened by the fire, it added.

Fire officials released the video to remind the population to follow alerts given by authorities. “People are reminded to adhere to the warnings when given from the appropriate services as this is not a pleasant place to be when a fire impacts at any time, especially at short notice.”