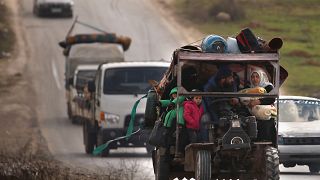 Hundreds of families fled their homes in northwestern Syria amid intense bombardment by Syrian government and Russian forces.

Trucks loaded with belongings were seen on main roads in the northwestern province of Idlib as they headed toward the Turkish border.

Over the past three days, Syrian troops captured at least six villages in Idlib province which brings them closer to retaking a critical highway that's been held by rebels since 2012.

Syrian President Bashar Assad's government has retaken control of most of the country from rebel fighters, largely because of air support from Russia, which helped turn the tide in the nearly nine-year civil war.

Idlib province is home to around 3 million civilians and the offensive in the province has displaced hundreds of thousands of people.

The United Nations has warned of the risk of a humanitarian catastrophe along the Turkish border.

Violence in the northwestern province has continued despite a ceasefire agreement between Russia and Turkey.