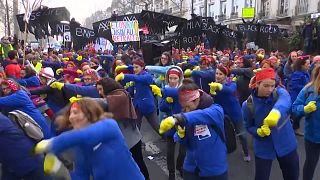 French unions held last-ditch strikes and protests around the country on Friday as controversial pension reforms were presented to senior ministers.

Travellers faced renewed disruptions on regional trains and the Paris subway, and some schools and other public services also faced walkouts.

However, Friday's transportation troubles weren't nearly as bad as earlier in the 50-day-old strike movement.

The number of striking workers and halted trains dropped considerably this week after the government made a series of concessions.

The proposed legislation is set to go before MPs as early as next week.