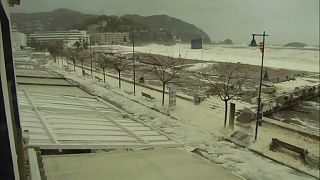 It comes after Storm Gloria caused high waves and seawater agitation, which can cause the creation of foam.

Footage showed waves crashing in over Tossa de Mar's beach, with floodwater moving past shoreline restaurants and businesses on its way to the old town centre.

Sea foam is normally formed when the ocean churns up high concentrations of organic matter, such as algal blooms forming foaming agents.

Although often naturally occurring, pollution from contaminants found in fossil fuel, sewage and detergents can contribute to the creation of foam.

Authorities in Tossa de Mar described the situation as complicated, however, informed that the foam did not pose an immediate threat.