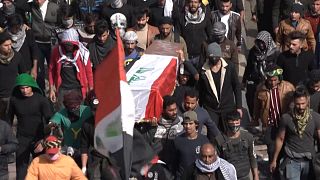 An Iraqi anti-government activist was gunned down in the southern port city of Basra, a police source told AFP on Wednesday, amid resurgent rallies demanding authorities implement long-awaited reforms.

"Civil society activist Janat Madhi, 49, was shot on Tuesday night around 11 pm (21h CET) by armed men in an SUV," the police source said, adding that five people including at least one other local activist were wounded in the shooting.

A source at the city's forensics lab confirmed to AFP that Madhi suffered gunshot wounds.

An AFP reporter said she was part of an activist group giving medical care to demonstrators. The group departed the main protest camp in Basra late Tuesday, the reporter said, after which they were fired upon by unknown gunmen.

The killing is the latest in a new wave of violence against Iraq's anti-regime protests, which had waned in recent weeks amid growing tensions between Baghdad's two main allies, Tehran and Washington.